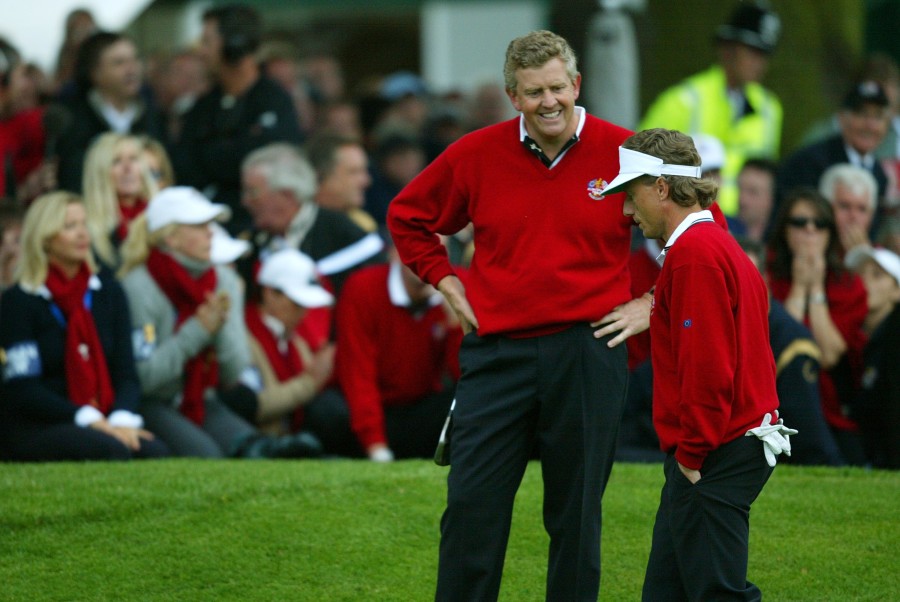 The Scotsman featured in eight consecutive Ryder Cups between 1991 and 2006, with a staggering record of 20 wins, seven halves and nine defeats in 36 matches.

Between 1993 and 2002, the Scotsman never missed a session and throughout his Ryder Cup career he was unbeaten in all his singles matches across those eight appearances, picking up six wins and two halves.

Neil Coles and Colin Montgomerie share the mantle at the top of Europe’s singles tally, with both men honing their crafts across different decades of competition.

On the eight-time European Tour Number One’s birthday, we look back on one of his finest appearances for Team Europe.

This came at The 2002 Ryder Cup held at The Belfry, where the Scotsman finished the week unbeaten after playing in all five sessions, winning four points and securing a halve in the other match.

Playing in his sixth consecutive Ryder Cup at the time, Montgomerie would find himself paired with another Ryder Cup veteran in Bernhard Langer – who was playing in his tenth Ryder Cup – in match three of the opening Friday fourball session.

They came up against the American duo of Jim Furyk and Scott Hoch, but the Europeans’ experience proved too much for the Team USA pairing as Langer and Monty cruised to a 4&3 victory.

Europe would take a 3-1 lead after the opening session with Thomas Bjørn and Darren Clarke winning their match against Paul Azinger and Tiger Woods by a hole and Sergio Garcia and Lee Westwood defeating David Duval and Davis Love III 4&3. 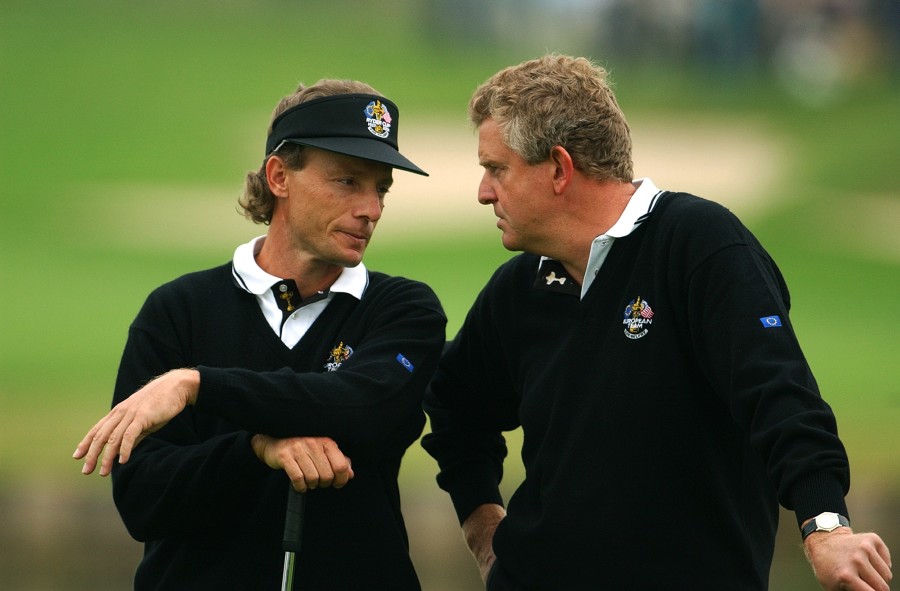 However, the Americans would claw the match score back by winning the Friday afternoon foursomes session 2 ½ – 1 ½.

And it was the experienced pairing of Langer and Montgomerie who would earn Europe’s half point, although they will have been disappointed not to have won their match having been 3UP through 14 holes against then World Number Two Phil Mickelson and rookie David Toms. 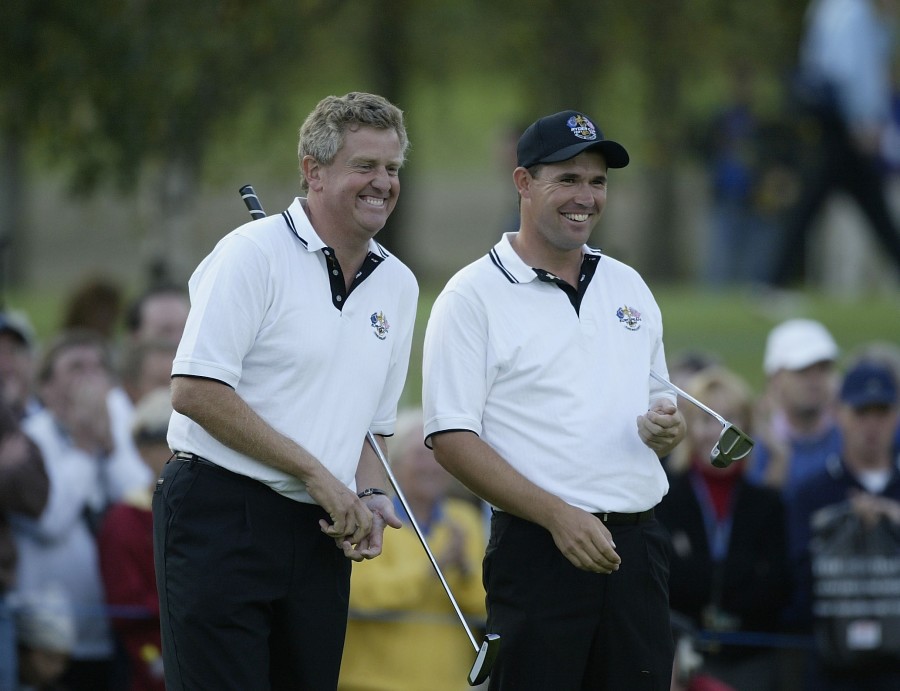 However, having lost holes 15, 16 and 17, the pair would find themselves all square heading down the last.

Both sides would make a bogey five to see the spoils shared.

The following day, Langer and Montgomerie would link up again. This time, the opening session was in the foursomes format and the European pairing would put behind their disappointment of the previous session by defeating Hoch and Scott Verplank by one hole.

This would be the European pairing’s seventh and final match together, finishing with a record of five wins, one halve and just one defeat.

For the second consecutive day, Europe would go on to narrowly lose the second session 2 ½ – 1 ½, but it was the Scotsman and 2020 Team Europe Captain Padraig Harrington who secured Europe’s only win of the Saturday fourball session.

They took on Mickelson and Toms, who had produced a fine comeback the previous day against Langer and Montgomerie to secure half a point for their team.

However, Montgomerie would put that disappointment behind him and secure a 2&1 victory alongside Harrington.

Heading into the Sunday singles matches, the scores were tied at 8-8 and it was down to the experienced Montgomerie to lead the way for Team Europe.

And lead the way he did.

Playing in his fifth match of the event, Montgomerie looked anything but fatigued as he comfortably defeated Hoch for a third time 5&4.

The early blue on the board for sure inspired his teammates as Langer (4&3) and Harrington (5&4) closely followed with comfortable victories of their own. 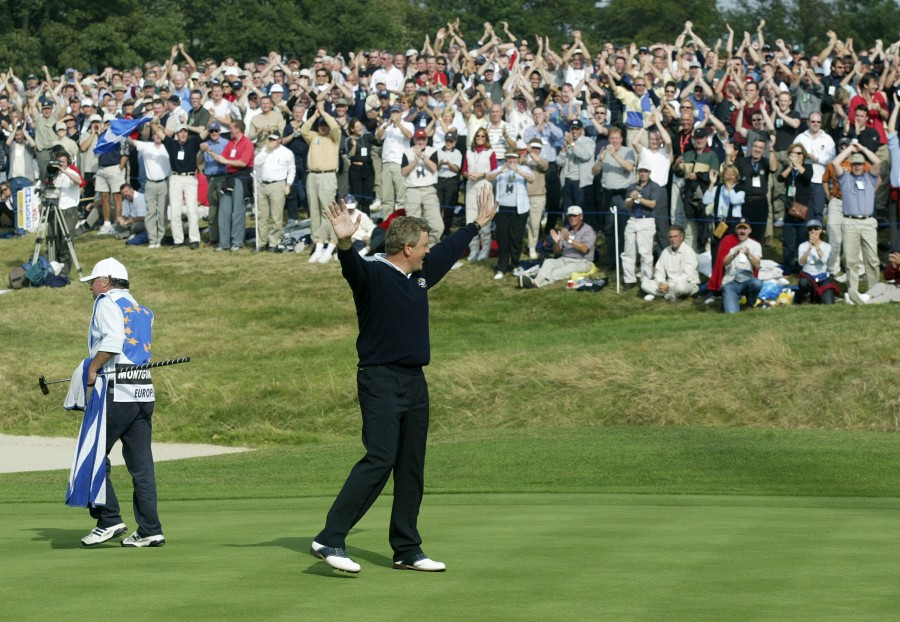 It fell to Paul McGinley to hole the putt which won back The Ryder Cup, after disappointment at The 1999 Ryder Cup three years previous.

Montgomerie would go on to play in two further Ryder Cups in 2004 and 2006 and when you add to that a winning captaincy at The 2010 Ryder Cup, it is no wonder Montgomerie is regarded as one of Team Europe’s finest competitors.